29th January 2011 – Lykke said “Congratulations to Kristina and Lussi and to grandma Elsa as well”.

Els and Erik report that Lykke is doing well but is a bad eater at present which they find frustrating. Unfortunately some do go through a stage like this but it would be most unusual if she doesn’t snap out of it when she is ready to eat well again. In a case like this it is best to offer food and, if not eaten within say 10 minutes, pick it up and offer the food again at the next feeding time. Of course, it goes without saying that treats should be kept to an absolute minimum during this time. Having seen my picture of the ice fall, they suggested that perhaps I should buy helmets for the dogs!

We wish you a Merry Christmas and a happy New Year.

Before our break there was snow here end there still is and there was lots of snow in the Eifel as well. Lykke enjoyed it very much. The garden of the house we rented in Adenau was completely fenced so she was in the garden for a considerable part of the day and enjoyed herself tremendously.

We did take some shots of her in the snow. In a few days time we had 20 cm of snow and Lykke ploughs through it and loves it.

Hope your dogs and cats are all well.

A big hug for all especially Elsa. (Els & Erik are the breeders of Elsa) 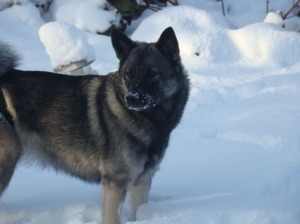 3rd November 2010 – The pups are 9 months already. Our Lykke is just great and naughty in an endearing way. She likes to cuddle and to sit in one’s lap. Something Taiga never wanted to do (Taiga was Lykke’s grandmother Elsa’s mum). She has not come into season yet. (Lussi and Lady have not either but I believe they are thinking about it) Last week we went to the vet and had blood samples taken for test for rabies. We are hoping for a positive result of course so a trip to Scandinavia comes just a tiny bit closer. (It will be lovely to see you and Lykke too, of course)

29th September 2010 – Els and Erik wrote “8 months today, how time flies” Too true, it seems like yesterday when the pups were being bor

Enclosed are some pictures from our holiday in France. Lykke enjoyed it very much. New scents, new surroundings. Lizards are fun as well but very fast and hard to catch which makes them all the more desirable. She loves being in the caravan as well, even when the caravan is in front of our house she jumps in at every possibility. And as you can see in the pictures she likes to look out of the door watching what is happending aroun

Hope you are well and the dogs and cats as well. Winter is approaching rapidly, hopefully with less snow than last winter (we have got 30cm already – the dogs are having a ball!).

Queen of the castle!

20th August 2010 – A lovely photo of ME lying in very typical “frog style” pose. See also the close up of me on the front page. I’m off touring in my caravan for a few weeks with my mum and dad. I love the caravan and jump in at the slightest opportunity!

29th June 2010 – Els and Erik report that Lykke is growing well but has been having some trouble with her new teeth coming through which has lead to a lack of desire to eat hard or soft food. The hotter weather has probably contributed to this as well. Apparently she is a bit of a garden wrecker and today she caught her first mouse. Here are some of lovely pictures of Lykke that I received: 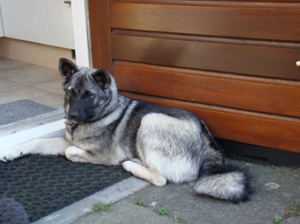 Mischief in the flower border!

Time for a tug of war

There's something interesting over there!

It's been such a hard day!

Lykke making herself at home with Els & Erik in The Netherlands 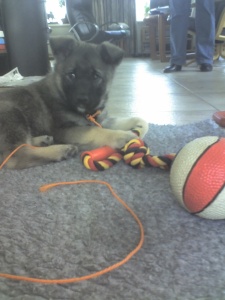 Have just received some news of Lykke who is settling into her new home well and gradually making friends with her new feline companions. It appears that she is very thoughful and works things out for herself and learns quickly.

Watching for the cats!

I know they put my toys in here!